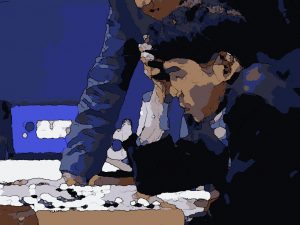 Web is abuzz with the win of AlphaGo, a Google computer program that has defeated Lee Sedol, a professional Go player of rank 9-dan rank in a Game of Go, played in Seoul, South Korea on 15th March 2016. While all AI enthusiasts are happy about it, there are many who are predicting AI doomsday.  Future is still far ahead, and perhaps still depends on how we shape the policies regarding AI development.  Let us first explore the technology behind this win, and also peep into the recent history for similar games.

Go is a strategy game almost 2500 years old, while the rules of game are simple the strategy possibilities make it complex.  It is one of the oldest board games. Aim of the game is to cover  larger area of the board with one’s own colored stone. The standard size of board is 19×19.  Game of Go has an enormous search space thus increasing the difficulty of evaluating board positions and moves. It is much more complex in term of strategy as compared to chess game (10^760 possibilities as compared 10^120 of chess).
Google’s AlphaGo uses deep neural network trained by a combination of supervised learning and reinforcement learning from games of self play.   It uses Monte Carlo Simulation to generate search tress for self play. Go has ‘value networks’ to evaluate board positions and it uses ‘policy networks’ to select moves.
In 2011 Watson a computer developed by IBM won Jeopardy ( A quiz show) against former winners Brad Rutter and Ken Jennings. Watson had an ability to answer questions asked in natural language. It had 4TB of  both structured and unstructured content. Watson applies natural language processing,  knowledge representation, information retrieval and machine learning tools to accomplish the task of open domain question answering.
Many many years before (yep in computer world almost an era ago) in May 1997, Deep Blue a chess playing computer program defeated Kasparov, the Chess Grandmaster. Deep Blue would search to a depth of between 6 to 8 moves to a maximum of 20 or even more in some situations. It had a “evaluation function” to select out of the possible searches. Deep Blue had no learning of its own, its programmer on learning how it performs used to modify it in between games.
The win of AlphaGo suggests that AI is now here to stay. Unlike past this time hopefully it is not a premature delivery (like neural networks in 1960s). Robots and machines with AI will increase and slowly become part of our world. In the future we can have a society where robots with AI are helping humans to make the world a better place to live not just for humans but for all sentient beings.